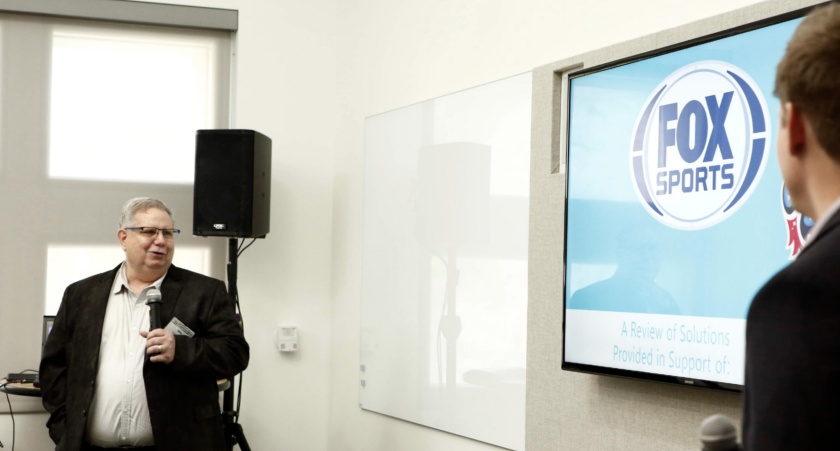 To successfully deliver video coverage of the 2018 FIFA World Cup from Moscow, FOX Sports and IBM Aspera had to overcome various challenges, according to executives from those companies.

FOX Sports’ coverage of the 2018 World Cup included the delivery of more video to U.S. viewers than was broadcast in the four previous FIFA World Cups combined. Included were live HD and Ultra HD (UHD) streams across unmanaged Internet Protocol (IP) networks from Russia to FOX Sports’ central facilities in L.A. for real-time editing, while matches were ongoing, by using IBM Aspera FASPStream technology. Every match was shown live on either FOX or FS1.

And it was all done while greatly reducing remote production costs, the companies said.

“These were not just like kind of average feeds: these were 220-megabit video bit rates and 1080p50,” IBM Aspera CTO Mike Flathers said during the afternoon technology breakout presentation “How FOX Sports Revolutionized Production of the 2018 FIFA World Cup” at the Oct. 4 Hollywood Innovation & Technology Summit (HITS) Fall event.

“You actually add audio to that and you’re pushing 250 megabits a second,” he pointed out.

Among the many other challenges were the fact that the coverage involved 64 matches over the course of 31 production days, more than 320 hours of local content and very long distances between stadiums, he said, referring to the fact that the 12 venues were spread across a whopping 1,800 miles. There was also a 10-second delay from ingest in Moscow to live editing done by FOX Sports in L.A., he noted.

Additionally, the fact that the event was held in Russia posed unique challenges for international data connectivity that Aspera was able to seamlessly and securely navigate, according to Flathers.

The production feeds originated in Moscow. For that, there was a studio set in Red Square and a centralized control room in the Moscow suburbs. Host Broadcast Services (HBS) provided all match feeds via serial digital interface (SDI) and fiber to separate International Broadcast Centre (IBC) facilities in Moscow, according to FOX Sports and Aspera.

Flathers and Brandon Potter, director of post production at FOX Sports, showed HITS Fall attendees a highlight reel that was broadcast at the closing of coverage for the event.

When a company like FOX Sports takes on a complex project like this, it can either put all its money into building out a facility in a far-off location such as Moscow or “you can put that same money into your [U.S.] edit facilities, in this case in L.A.,” and handle the event using Aspera’s technology, Flathers said. Opting for the latter allowed FOX, “to do some things that it might not have otherwise been able to do,” he said.

As an example of that, Potter pointed out that, after the final match, “we had about six hours to get all our media – that was it.” He added, after that: “They turned off the lights. The power was gone. So, we had to make sure everything was done by that point. We didn’t have extra days to get all the media uploaded” or anything else.

Further explaining the complexity involved in the undertaking, Potter told attendees: “Our storage was about a petabyte over there and we had to get all this media,” including electronic news-gathering (ENG), “back to Los Angeles for edits.” About “99 percent of all our editing had to be done 6,000 miles away,” he noted.

All the live SDI feeds that were presented in Moscow came from HBS for its FIFA MAX platform, Potter said, adding that the problems with that included the fact that it was “only for local users that were there in Moscow” — for local storage — and involved high licensing costs. Therefore, FOX Sports set up a mobile application management (MAM) system to generate its own feeds, he said.

“The amount of data that we actually pushed ended up … eclipsing the estimated amount,” Flathers told attendees.

About 22,600 assets ended up being managed during the overall event and 1.9 petabytes of event content were uploaded to Amazon Web Services via Aspera, according to Aspera and FOX Sports.

Aspera used both its FASPStream and file transfer technologies, Flathers said, noting that other partners for the project included Telestream and Levels Beyond’s content management system.

“Those are the core functions of what made this all a reality,” Potter said. He and Flathers each stressed the importance of teamwork in pulling it all off successfully.

“We had a pretty tight integration with Telestream…and we’ve had an integration with Levels Beyond for some time as well,” Flathers said. But he said: “Leading up to this event, we tightened those integrations a lot more. We really, really made sure that things were tight…. We didn’t know what we were going to run into…. Mid-match, what if connectivity drops off? What if we get cut in half? What if we lose connectivity completely? How are we going to recover from that? Those type of things we wanted to make sure that we account for.”

Although there were indeed some issues that cropped up from time to time, “fortunately,” there was “nothing catastrophic” that happened during the event, Flathers said.

There were certain technology vendors that ended up backing out at the last minute, he and Potter pointed out. Instead of finding new vendors to take their place, Flathers said: “We had to accommodate for them…We all just kind of rolled up our sleeves together and said ‘Ok, we’re going to have to build this together.’ And that’s what we did, honestly… and it worked.”