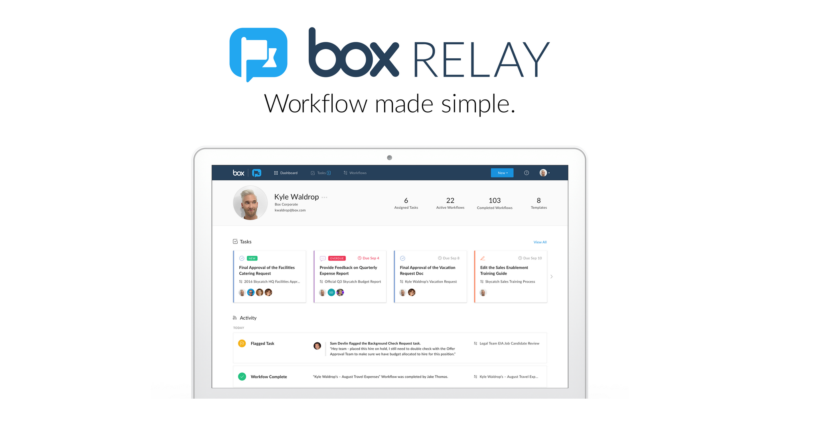 Box expects to benefit significantly in 2019 from the one-two punch of the upcoming launches of a new version of Box Relay in the first half of the year and then Box Shield in the second half, according to Box CEO Aaron Levie.

“This year, we think we have the most exciting product roadmap we’ve ever had,” one that includes “two major new products,” he said Feb. 28 at the Morgan Stanley Technology, Media & Telecom Conference in San Francisco.

Box Relay is an “all-new version of our workflow automation solution, this time natively built on Box and sold as an add-on SKU directly where we take 100 percent of the revenue,” he told attendees.

Box introduced Relay in 2016, in conjunction with IBM, and “the response from customers was actually overwhelming in terms of people really wanting Box to be in the workflow space,” he said.

Box Shield, meanwhile, is the company’s “advanced data, security and threat detection service,” he noted. It was introduced at the company’s annual BoxWorks conference last year. At the time, Box said Shield will provide “intelligent security for the digital age,” offering features including anomaly detection and a content firewall.

“Those two products, as well as advancements to our Platform and metadata services, we think, allow us to fully unseat the legacy” enterprise content management (ECM) players and “really drive a catalyst for customers to move more of their mission-critical workloads to the cloud” as they continue their digital transformation initiatives, Levie said Feb. 28.

As Box kicked off fiscal 2020, it’s “focused on two key objectives to drive our next phase of growth on our path to $1 billion in revenue and beyond,” he told analysts. The first objective is “building the category-defining cloud content management platform that powers our customers’ digital business processes,” he noted. The second objective is “accelerating our customers digital transformation with cloud content management through our go-to-market efforts,” he said.

From conversations with Box’s largest customers, it was “apparent that they have a wealth of manual business processes primed for automation,” he also said, telling analysts: “We’ve heard overwhelming feedback from our customers that they want simpler ways to consume workflow automation natively within Box.”

Meanwhile, because content is “being accessed from more locations, apps” and devices, as well as “shared across a growing network of external partners and customers, we need a brand new approach to security in the cloud,” he said. That’s why the company is launching Box Shield as an add-on product, he told analysts, adding: “We’re already hearing from prospective customers that Shield will be transformational to their security and risk posture in protecting critical intellectual property.”