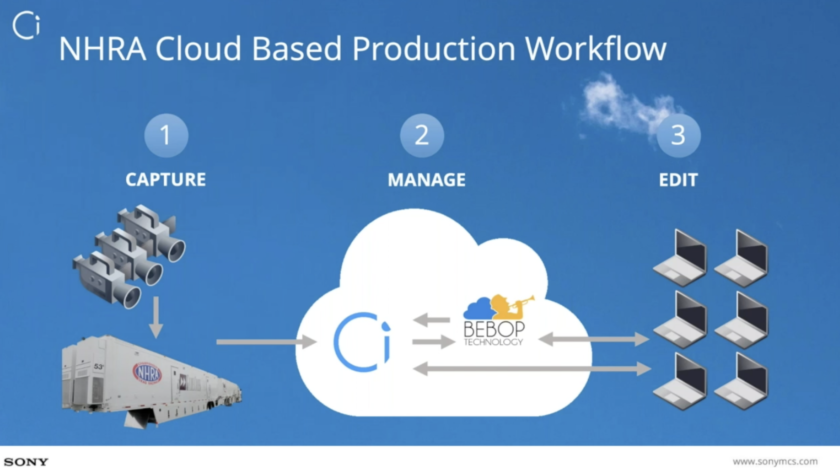 Sports brands need to increase the value of their assets while keeping their fans engaged in compelling content and there are several advantages for them to move their post-production to the cloud – and the National Hot Rod Association (NHRA) provides a compelling case for how that move has helped it.

NHRA, the largest motorsports sanctioning body, had passionate fans who were ready and waiting for more engagement beyond the race event coverage. So, it turned to Sony’s Ci cloud platform and BeBop Technology’s virtual editing workstations to turn its small team into a remote powerhouse, pumping out gigabytes of content to those fans, executives from all three organizations said March 18 during the webinar “NHRA: Why We Moved our Post-Production to the Cloud.”

Providing an overview of the technology involved and how it is being used, David Rosen, VP-Cloud Applications and Services at Sony Imaging Products & Solutions – Americas, said NHRA captures content from several cameras, that content is produced for broadcast from a truck on site at events, and that “content is moving into the cloud, where it’s available and ingested into Ci and made available in BeBop, where editors anywhere are able to edit that content directly.”

During a show, clips are pushed from the truck via Ci using built-in file acceleration and, for reliability, content is retried and resumed “if there’s interruptions,” he noted.

Live streams of the broadcast are also pushed directly into Ci, which he pointed out is an entirely cloud-based, unified media platform for networked organizations. Live streams of races, meanwhile, can be logged for searchable highlights.

Other benefits of Ci include the access it provides to a searchable catalog of all finished content and works in progress, the seamless sharing and reuse it provides to various groups, an elimination of the need for any other file transfer systems, and the fact that it requires a zero capital expenditure investment with minimal impact to facilities, according to Sony.   Ci also includes artificial intelligence services that are built in and “can be turned on at will for different sets of content,” Rosen noted. Computer Vision is used to “recognize people, places and things,” and there is also auto-transcription, he said.

Metadata is stored and captured in Ci, so even if you are in BeBop, you can see and access that metadata, he said.

Also important: “Security is obviously key to everything we do,” he said, noting everybody must be authorized to see the content in Ci. “All the way through the chain, through any file transfer, there is end-to-end encryption… and we make sure that every activity is logged, so at any point you can go run an activity report so you can see everything that everybody has done,” he explained.

Reflecting back, he said, “when we first started years ago in the cloud space, there was a significant amount of concern” that if one could not touch the content, how would you know it was safe?
“But really what we found, in working more and more with customers, is that mindset has really shifted, I’d say, 180 degrees to the point where people realize that the fewer places that that content has to be stored, the more secure it actually is,” he said, adding: “That content is never leaving the cloud up until the very last point when it’s being delivered directly to the final destination.” And “we go to great lengths, to make sure that all of our customers’ content is well protected,” he said.

BeBop, meanwhile, “brings an accelerated file transfer protocol” – BeBop Rocket – “to the table, similar to ones that are leveraged and used by Sony Ci and others,” according to David Benson, CTO and co-founder of BeBop.

There is only one “limitation, I would say, that we’ve all identified … with a little bit of an eye towards the future and what we’re going to try and focus on” going forward, he said, adding that one “downside to this approach [is] we noted that the downloading and a lot of the content moving operations require workstations to be running.”

The NHRA about five years ago decided to bring its own productions in-house and, with that, it needed to create a media arm for the association “akin to” PGA Tour Entertainment, NBA Entertainment and NFL Films, recalled Mike Rokosa, NHRA technology executive.

“One of the things that we kind of recognized very early was to try and build a physical archival system was not something that the Association was going to be able to support and never mind the cost of doing so,” he explained.

NHRA realized that the Ci and BeBop solutions would achieve what it was looking for, he said, but conceded there was a “learning curve for all of us involved” once adopting those solutions.

Rob Hedrick, NHRA director of post-production and supervising producer, went on to explain how much time the Ci and BeBop solutions are saving. Using the show NHRA sends back to Fox Monday nights as a “bellwether,” he said: “The turnaround on that is tremendously improved because now, instead of having to download it, edit it, put it on hard drive and then send it back up for QC approval through Fox, one of the cool functions built into Ci is that you can actually do Aspera deliveries right out of the library, so I’m able to send an Aspera link right from the asset in the library to captioning and, at the same time, send it to Fox” for standards and practices approval.

In the past, he explained, “before, that upload would take — I would start it at like 6 pm or 7pm Monday night and then I would get the email that it had uploaded at midnight; so, the delivery times have tremendously improved.”

Also great is being able to take the live stream into Ci, he went on to tell listeners. Noting that NHRA events tend to be a whopping 10-12 hours long, he said that now, “instead of having to wait for that to finish and render out, you can actually go in and grab the live stream as it’s happening, clip a piece off there and deliver the file if someone needs to review something immediately or if you need to send it.” What’s more, you can also take a “clip right off the live stream out of Ci” and post it on social media, he added.