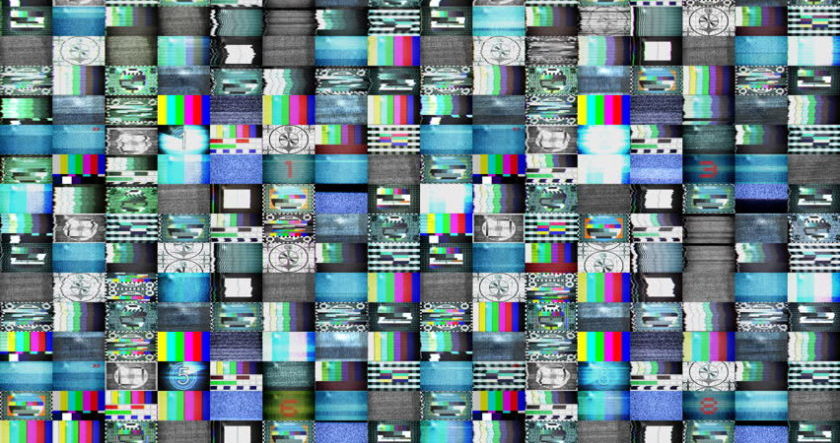 Industry Execs: Media Will Bounce Back from Coronavirus Impacts

COVID-19 has significantly harmed the media industry, but the sector is learning a lot of lessons from the current crisis and will bounce back, according to Peter White, CEO of the International Trade Association for the Broadcast & Media Industry (IABM), and executives from companies representing the production, content provider and supply sides of the industry.

“The impact on revenues is quite dramatic” so far in the sector, White said March 26, during the first of four sessions making up a webinar on “How the Coronavirus is impacting the media industry” by IABM and Digital Production Partnership (DPP).

Seventy-one percent of media industry suppliers are saying their revenues will decrease in this period and probably are already seeing the impact of that, White told viewers. Although the decrease is a little less for buyers, it’s still “quite severe,” he said.

Sports broadcasters have been “particularly badly hit,” he said, noting the lack of live sports events happening globally now. Production and post-production organizations are being “badly hit too,” he said. Hardware tech has been impacted severely also, with those in that area who expect a revenue decline projecting an average decline of about 44%, he noted, calling these “stark numbers.”

As the industry has shifted to more of an as-a-service business model, we have seen — even before the current crisis — what can be described as a situation that can be summed up as “the good, the bad and the ugly,” he said. The good is that software revenues are at an all-time high in the industry, while the bad is that a large share of tech suppliers still rely mainly on legacy offerings to drive their revenues, he explained. And the ugly is that suppliers transitioning to as-a-service offerings are likely to see their “massive cashflow crunch” only become “exacerbated and accelerated” as a result of the coronavirus crisis, he said.

Increases in investment, meanwhile, are mostly in the areas of over-the-top (OTT) and other streaming services, while virtualization, remote production and artificial intelligence/machine learning are the top three tech investments being made, he said.

The transitions to 5G next-generation wireless service and from Serial Digital Interface (SDI) to Internet Protocol (IP) “will help support this new paradigm shift” that is “going to be accelerated” by the pandemic,” he predicted.

He also predicted the uncertainty we are seeing in the industry now “will be with us for probably some years to come.”

However, during the suppliers webinar session White moderated that followed, Avid Technology CEO and president Jeff Rosica predicted that the media industry will “bounce back” from the current crisis probably much faster than most other sectors.

Summing up the media industry, he said: “We know its strength. We know its determination. We know its resilience. And so I’m pretty confident we’ll shine through. Our community is hurting a lot right now. We’re seeing it from the largest media companies all the way down to independent creatives that are gig workers. I believe the media industry and technology suppliers can emerge from this even stronger and better … . But we’ve got to make the right moves, as companies, as individuals and as an industry.” 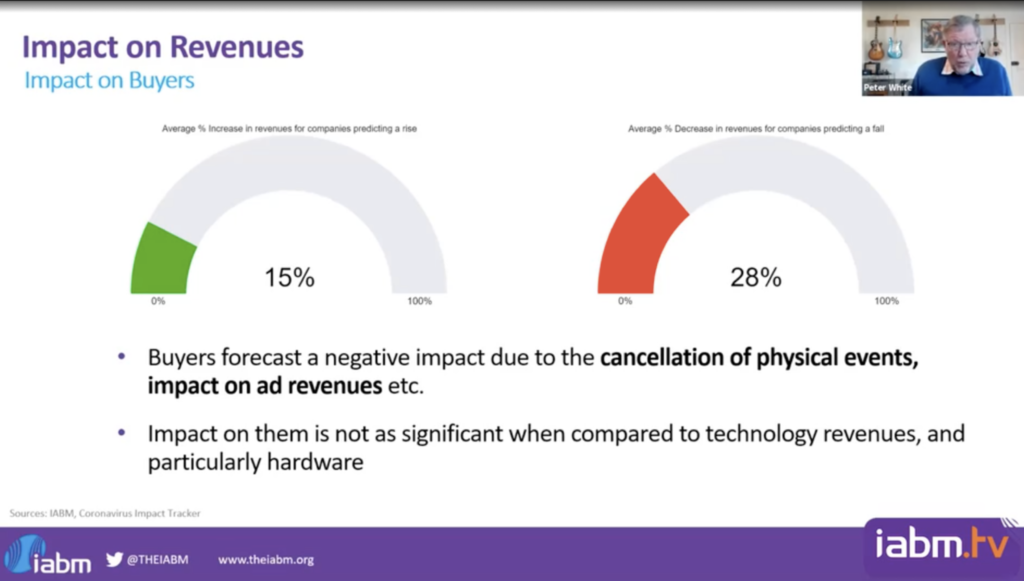 He went on to offer several suggestions. First, for tech suppliers, “if they’re not doing it already, I think everyone’s got to be re-prioritizing your efforts,” he said, adding: “I think whatever expectations you had for 2020 and beyond coming into this crisis, they’ve completely changed. We’ve got to help our community find new ways of working and ensuring business continuity.”

For Avid, “almost overnight, our dialogue with customers, including broadcasters, film studios, post houses and all others around the world … has turned almost entirely to one topic: Keeping operations going during this crisis,” he said.

What Rosica has also seen are “organizations from the smallest to the largest have had to scramble to keep productions going, deal with facility closures or simply find new ways to work,” he told viewers. “Not everybody was fully ready for this from a business continuity standpoint [but] I think we’re learning a lot together very quickly.”

Also for Avid in this crisis, “in many cases, the solution for us to help people has been as simple as just switching on capabilities that they already had but maybe didn’t even realize or that we could put in place very quickly for them so they could help teams start collaborating and working remotely and to keep those productions going.”

Meanwhile, some clients are turning to a “much more comprehensive solution – they’re leveraging public cloud,” he said, adding: “We’re seeing people move really quickly in some areas, looking for workflow solutions that are going to protect capacity, protect capabilities, protect and quite frankly allow greater access to content than maybe they have today.”

A lot of people in the industry are experimenting now with new ways of doing things and “I think that’s a good thing for the industry,” he said.

“Our hope is that this tough period will actually yield some new paths to greater cost efficiency and productivity because we need it as an industry,” he pointed out.

What TV Viewers are Craving

“Feel-good, warm, less-challenging content is doing well” right now as TV viewers are looking to balance out the serious news they are often watching during the crisis, according to Matt Westrup, VP of technology & operations at A+E Networks, who noted he had recuperated from the coronavirus himself.

Speaking during a content providers session, he said crime content was “not doing so well.” After all, “dark, challenging content – that’s not what people want right now,” he said.

Morwen Williams, head of UK operations at BBC News, agreed that viewers want to watch lighter content right now. However, she said there has been a positive response from viewers to her network’s health and science correspondents.

Her network has been down a lot of staff who have been quarantining themselves, but several were expected to return from isolation this week, she said. The network can continue to cope, but that depends on how many more members of its staff come down with the virus, she said.

Some More Positives Amid the Challenge

It was “quite a challenge” to make sure those working on productions for independent TV production company Nutopia were able to get back home from shooting around the world when nations started lockdowns in recent weeks, Helena Tait, that firm’s COO, said during a production session.

Luckily, they weren’t in the middle of any major shoots and staff are continuing to edit now, while its big shows have gone on hiatus, she said, adding: “I remain optimistic that there will be content out there that’s being made. We will certainly be prepping like mad” for when this crisis is over.

Meanwhile, Pete Fergusson, CEO and founder of branded video production service company Nemorin, has learned that “remote working can actually work and it is worth trying,” he told viewers. And “productivity can potentially go through the roof” with fewer distractions from colleagues at home, he noted.

His company was planning to shoot back to back in Europe, the U.S. (Los Angeles) and Mexico-for a big client, but that all got pulled back, while other production shoots were postponed, he said. However, post-production is “still very much happening using a mixture of online services and hard drives that have been collected from the office,” he said.

Fergusson was feeling a “weird mixture of panic — but also excitement about the future; I think there’s a real spirit of collaboration” in the industry, he said.

Although he predicted the economy will “go the other way very quickly” once the lockdowns are over and the crisis is over, the virus has “scarred the industry,” he said.

Broadcasters are “probably going to be tightening their belts even more in terms of the budgets they have … but [that] may present some opportunities for getting more brands involved in co-funding projects,” he predicted.

He predicted we will see a lot more animation and “explainer” videos that can be created in post-production over the next 12 months as a result of the crisis and the current difficulty in shooting live-action productions.

When the Trump administration said Europeans could not go to the U.S., Keith Scholey, director at natural history film specialist Silverback Films, said he realized that the crisis was moving faster than he expected.

Scholey predicted “the whole view of the world will be different after this — I think people have woken up to the point that actually they’re not safe, and the world is no longer safe. And that’s a fundamental change.” Issues like climate change will become more “prominent” as a result of people realizing they are more vulnerable now, he predicted. The world just reduced carbon dioxide emissions in just two months and the world is still turning, so people will realize they can actually change if they need to, he said, adding people will also realize as a result of the crisis that they don’t need to travel as much as they used to. “The world is going to be very, very different by Christmas,” he predicted.