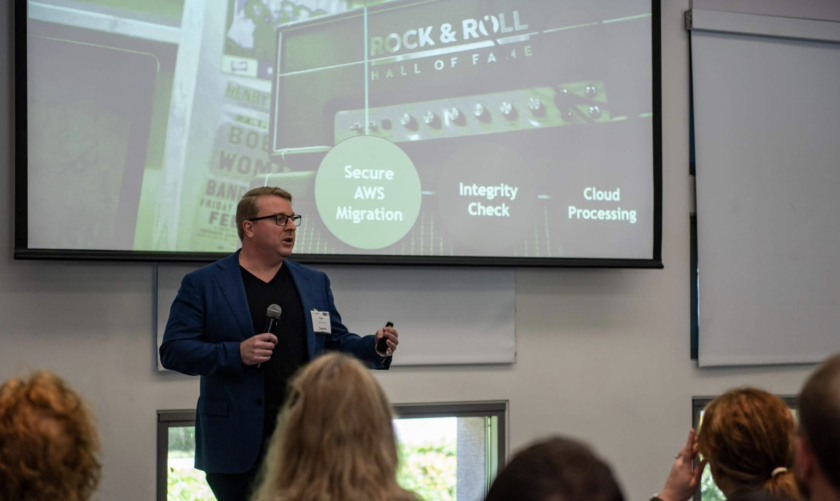 Faced with the daunting challenge of preserving video content trapped on old, decaying tape media and an obsolescent infrastructure, the archives of Cleveland’s Rock & Roll Hall of Fame needed something new — a centralized digital media repository, one capable of handling multiple assets with varying taxonomies and metadata structures, and a highly configurable user access.

It needed to allow everyone to know exactly what is available, and what could be used.

“Everyone can relate to it, everyone understands how important the Rock & Roll Hall of Fame is to music,” Kyle Evans, director of sales for Tape Ark, said earlier this month during the presentation “We Will Rock You: Preserving the Richest History of Rock and Roll Footage for Future Generations,” at the Smart Content Summit.

In 2012, the Hall added a separate library and archive, geared toward preserving and providing access to the group’s archival collections, covering millions of documents, audio recordings, photographs, video files, and more. But when that Library of Archives got underway, LTO tape storage and backup was the go-to for preservation-level content, included managing larger files, Evans said. Down the road, that became expensive to maintain and, eventually, inaccessible due to technical challenges, leading the Hall of Fame with no way to access it.

So beginning in late 2018, Heidi Quicksilver, senior director of digital systems and strategy for the Hall, undertook an assessment of the state of the infrastructure behind it all, and determined that the current structure (including the LTO tapes) needed to be urgently addressed to save the content. After starting with cloud native media asset management running on Amazon Web Services (AWS) and Amazon S3 Glacier Deep Archive storage to move to preservation-level digital media, AWS introduced the Hall to Tape Ark, to handle the tapes themselves.

“There were parts of each files spread across multiple tapes, and much of it was inaccessible,” Evans said. “When they looked to solve the problem, they decided that if they just looked to a new form of tape, they would repeat the past. They wouldn’t be able to provide engagement outside of Cleveland.”

Tape Ark, with their partner Seagate, safely restored more than 2,800 hours (or 350 TB) of preservation-level video files for the Hall’s Library of Archives, ingesting the content into the public cloud. During the process, they even discovered 109 preservation level videos that the Hall itself didn’t even know existed.

“These [legacy] systems are not designed for a mass migration, so we went about designing a system that could really scale and change that dynamic for those companies that want to get away from tapes,” Evans said. “It’s been revolutionary, using an IoT-based system that allows us to add an infinite number of tape drives and parallel process. If a customer has hundreds of thousands, or millions of tapes, with hundreds of petabytes of data, we can process those.”

And now with that data in the cloud, using AWS, the Hall can apply machine learning, artificial intelligence, automated metadata creation, speech-to-text and more to video content that used to be stuck on tape in Cleveland. The Hall has gone on to partner with GrayMeta and its Curio Platform to connect all digital assets, to extract and create metadata for faces, places, logos, spoken words, and even emotions and sentiments.

“When you look back at [the Hall’s] mission, they can now really fulfill it,” Evans said.