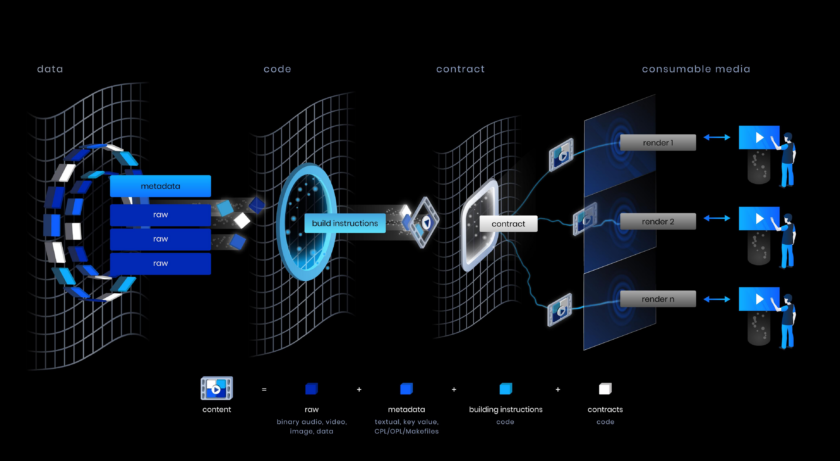 Join the co-founders of Eluvio May 20 for the free webinar “The Eluvio Content Fabric: A Live Webcast for Content Providers”

In media and entertainment, sometimes the old way of doing things sticks around longer than it should, either because the technology hasn’t quite arrived yet, the legacy players don’t want to let go of what already works, or the economics have made some stakeholders too comfortable to innovate ahead of what’s next.

It was a combination of all those things that led Michelle Munson and Serban Simu — co-founders of revolutionary data-transport service Aspera — to upset the applecart yet again, launching software firm Eluvio in the fall of 2019, and bringing with it a new way of thinking about video distribution: the Content Fabric, the no-cloud, no-content delivery network (CDN), global software network for moving premium video, from source asset to consumer.

“We started this to address what we think are the technological and economical limitations around video and the internet,” said Munson, who served as CEO of Aspera (which IBM acquired in 2014) through mid-2017. “This global crisis is a perfect example what we’re talking about, in terms of the real cost of the architecture, both in terms of internet congestion and experience costs, and the secondary [issue] of plain old agility.” 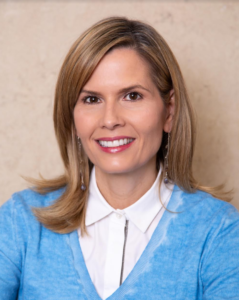 CDNs and cloud-stack technology have served their purpose well in the content delivery arena, but they’ve been around for 20 years now, without much in the way of improvement, Munson said. And the economics of today’s ever-growing video ecosystem have been hampered by the lack of growth among those technologies, with content providers at the mercy of those controlling the supply chain.

“While video consumption has been at an all-time high — and now at a peak beyond that because of the global situation — content providers, unless they control distribution channels themselves, are disadvantaged,” she said.

It wasn’t long after Aspera launched in 2004 that it became a mainstay among media and entertainment companies, with its Fast Adaptive and Secure Protocol (FASP) data-transfer tech allowing content to be moved through the digital supply chain without using legacy delivery systems. It would go on to win engineering Emmys and Hollywood Professional Association (HPA) awards, and proved the forward-looking technology know-how of Munson (a Fulbright Scholar at Cambridge University) and Simu (an engineering and telecommunications specialist out of Bucharest, Romania).

It was the creation of that first-ever content transport solution for the internet that gave rise to the Content Fabric, which has quickly earned high praise from early Hollywood adopters.

“While we were active with Aspera, we were constantly exposed to the file-based workflows, and as the company matured, also to the downstream distribution,” Munson said. “That showed us the problem of everybody making many, many file variants that are only slightly different, and then copying them between each other. And then not only using just storage resources to do that, but all of the other resources, and then duplicating between companies.

“Nobody has approached the problem this way.”

Simu and Munson — along with a team of fellow innovators — set out to solve what they saw as a deterrent in the way content is distributed and managed. Using the philosophy of decentralization, and working with tools like blockchain security, machine learning (ML), and advanced cryptography — all in order to simplify the process — they created the Content Fabric.

Debuting in September 2019, the Content Fabric is an open, high-performance software network, one dedicated to managing and distributing large-form content, and offering one platform to allow content owners to move assets globally for live, VOD, and linear channels, direct-to-consumer (D2C) and to business partners. 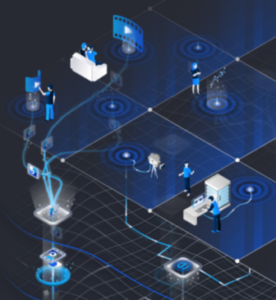 The Fabric works as an overlay network, consisting of nodes and internet exchange points, running as a single software stack, serving as a decentralized design for “what you’d think of as the distribution and storage,” Munson said. “The particulars of that avoid all file copies, and it is inherently, ideally, bandwidth- and storage-efficient in creating output.”

Bandwidth is minimized, storage is far less of a concern, and everything (assets, associated metadata, code) is delivered from the source objects to the consumer, all with ultra-low latency. There are no file copies involved.

“It makes possible new sources of experiences in entertainment, most importantly distribution capabilities in VOD, linear and live, that can all originate from the same source of media on the same platform,” Munson said. “Also, the ability to have direct monetization and personalization of the media without going outside of the platform.

“The ability to actually service the assets themselves, in place, without having to rely on separate service systems of file copies, is key.”

The Content Fabric removes the need to create additional copies of files used in distribution networks and storage facilities. An embedded blockchain ledger enables personalization, rights control, monetization, and re-use of media and metadata, across every property involved. Content is encrypted with a primary AES and secondary AFGH encryption, and accessed content is re-encrypted via the content owner’s DRM.

MGM Studios, Eluvio’s premier public customer, set about using the Content Fabric for global streaming to TV Everywhere, web and mobile for certain properties, taking advantage of the platform’s transcoding, audience reporting, and multi-format encryption and DRM services. It’s resulting in what amounts to a next-gen supply chain for the studio.

“At MGM, we’re constantly looking for new technology that can improve both our operations and the consumer experience,” Jim Crosby, SVP of digital for MGM Studios, said when Content Fabric was widely announced. “The deployment of the Eluvio Content Fabric started as an experiment to test this promising new technology, and it has exceeded expectations.

“It has delivered ultra-fast video loading, high quality playback, and a cost-efficient solution eliminating separate aggregation, transcoding and CDN services – and with its blockchain, provides us the ability to transact business directly on the content. We look forward to more to come with Eluvio.”

Munson says improvements are already on the way, with the Eluvio Media Platform — an open software layer running on top of the Content Fabric — offering applications that can further engage users, and allow content owners to profit off user attention in ways the CDNs and cloud providers can’t.

“The software stack brings together points of innovation that couldn’t be done before, and the most important thing of the data layer is to create a centralized design that is ultimately bandwidth and storage efficient, meaning it avoids all the duplication of bytes that goes through today’s file-based workflows,” Munson said.

“Even the areas of computer science we’ve exploited to do this did not exist in a mature form four, five years ago. The sheer newness of computing areas we’ve built on wasn’t available to do this.”

First with Aspera, and now with the Content Fabric, Munson and Simu have opened a lot of eyes to a new way of doing things.

The media and entertainment industry is looking forward to what they think of next.