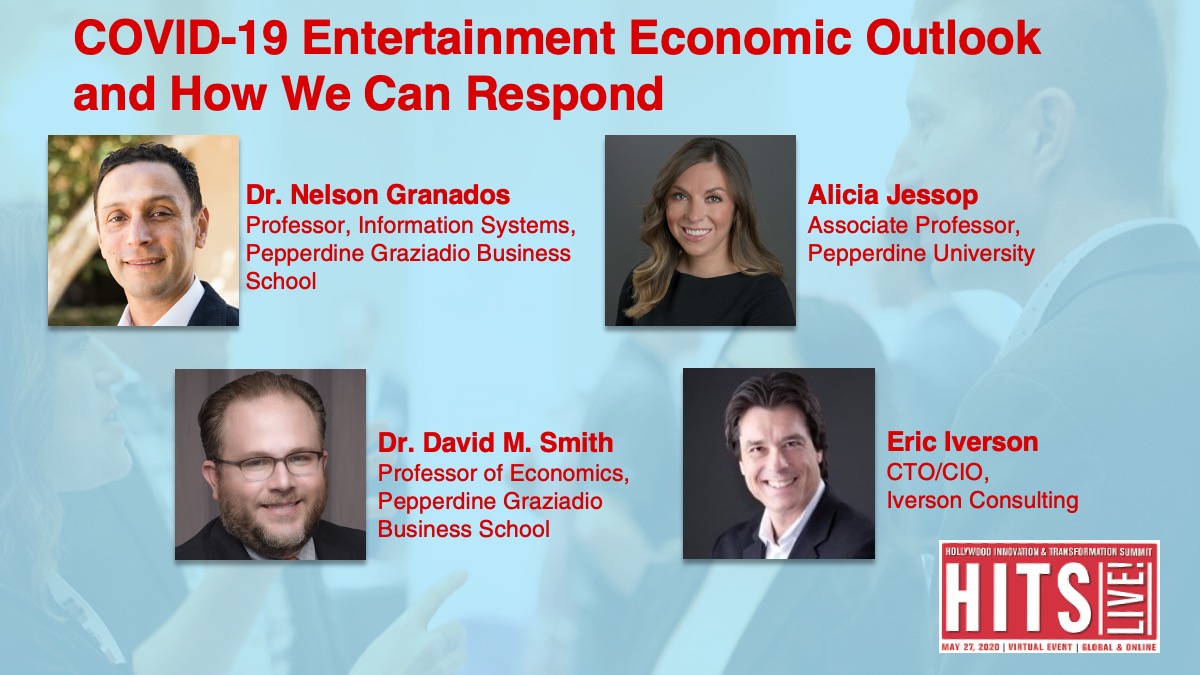 The media and entertainment industry has been facing multiple challenges as the result of the disruption created by the COVID-19 pandemic, but there are reasons for cautious optimism, according to a trio of Pepperdine University professors who spoke during a May 27 virtual panel presentation at the Hollywood Innovation and Transformation Summit (HITS) Live event.

“For the macro economy, things were looking very good” at the start of 2020, “which gives us hope as we look to recover” from the pandemic and its effects, Dr. Nelson Granados, professor of information systems and technology management at Pepperdine Graziadio Business School, said during the presentation “COVID-19 Entertainment Economic Outlook and How We Can Respond.”

“However, the hole is going to be pretty big that we start from,” according to Granados, who also serves as executive director of Pepperdine’s Institute for Entertainment, Media, Sports, and Culture (IEMSC).

Now, however there will be at least a 15% decrease in employment this year, he projected, which will bring us back to 2015. And that is “pretty optimistic,” he said, predicting it will be closer to a 20% decline or worse. He predicted employment will continue to decline for the print areas of the media sectors: Books, magazines and newspapers. Filmed entertainment employment had been stable, meanwhile, but is being very heavily impacted by the pandemic as production has slowed, he pointed out.

On the other hand, the video games and social media sectors have seen the most significant increases in employment, with increases of 12% and 29.2%, respectively, between 2015 and 2019, he noted. Sports employment has been strong also, but it’s been heavily impacted by the pandemic, he said.

In all, 15% of the entertainment economy has been impacted by the shutdown of live events, he went on to say. There have also, meanwhile, been indirect effects from the pandemic, he said, including: Decreased spending by consumers; a decline in ad revenues; increased piracy as discretionary spending has declined; sector-specific effects (no production and no downstream revenues to digital); health concerns (70% of theatergoers are hesitant or fearful, according to a recent Variety report); and social distancing causing less capacity at venues.

Digital consumer and ad spending have compensated for traditional media spending declines, he noted. But he warned: “Do not be surprised if revenues do not increase as much, even in places where you see strong consumption, like social media and streaming.” Meanwhile, the fact that advertisers are cutting their budgets significantly stands to impact the recovery, he said. 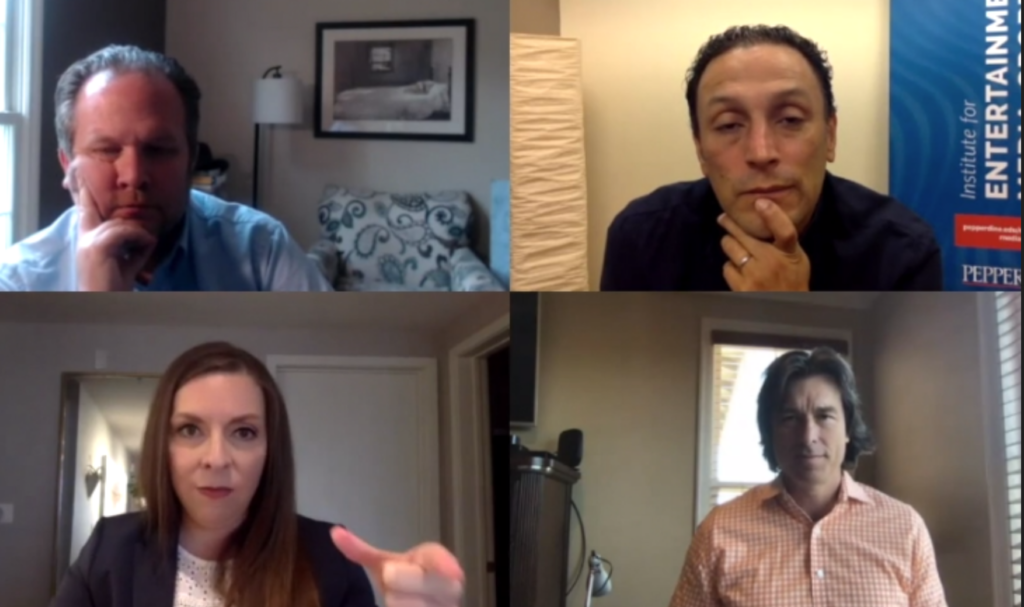 Looking to the future, he said the shift to digital will require more technology and analytics graduates and talent, which creates an opportunity for institutions including Pepperdine.

However, on a more positive note, he said: “Remember that necessity is the mother of invention,” predicting vendors and content producers and the HITS community will “help the industry get back on its feet.”

Alicia Jessop, associate professor at Pepperdine University, then turned the focus to the sports sector, noting sports league revenue has been driven by three main buckets where it makes its money: Broadcast revenue; sponsorship revenue; and ticket sales (fan attendance).

“The coronavirus is disrupting every single one of these verticals,” she pointed out, noting that certain players in the sports industry, with help from the entertainment industry, have been agile and are pivoting to protect revenue streams. There are opportunities for entertainment companies to partner with the sports sector or adapt some of the opportunities into their own practices, she said.

In sports broadcasting, over the past five years, “we have seen a massive shift from cable television consumption to streaming,” she said, adding: “Millennials like myself are cutting the cord. People in generation Z, who are my students, aren’t even plugging the cord in to begin with.”

COVID-19 will accelerate the sports industry’s transition to streaming platforms including Amazon and Twitch, she predicted, pointing to the National Football League (NFL) granting Amazon exclusive national rights to one game, which will air on a Saturday, as part of its contract extension for Thursday Night Football. We should expect non-network media companies to become “bullish” on in-app live video, while regional sports networks will increasingly explore podcast offerings, she said.

There are also unique opportunities in the eSports arena, she said, calling that the “greatest opportunity right now.”

Until there is a vaccine, stadium operators must convince fans that attending games is safe through the adoption of technology, while balancing privacy concerns, she noted.

“We need to be adaptable and we need to be creative — if there was ever a time and a case for emerging technologies to be adopted into the sports space, that time is now,” she argued.

Dr. David M. Smith, professor of economics at Pepperdine Graziadio Business School, started the panel presentation with an overall take on the overall macro outlook, telling viewers: “This is a very unique environment we find ourselves in.”

And he cautioned that, “when it comes to looking into the future, we really don’t have any past data to make a forecast, and so we just have to use our best guess in terms of what the future holds for the world… and the U.S. economy…. Any forward-looking prediction must include a real significant dose of humility.”

Stressing that “we’re just calling this an outlook, not necessarily a forecast,” he said: “I think the big question for all of us is what is the recovery going to look like? We’re confident that this event will pass us at some point. So are we looking at a V-type recovery, where there’s a sharp rebound? Are we looking at a little bit of a slower recovery, where there’s eventually maybe a stronger rebound and a U-shape-type recovery?…. Some are predicting more of a W [recovery], where we have a rebound in growth and then suffer a recession after that, or an L recovery” in which there is a “slow economic recovery that takes place after a downturn.”

It is “pretty ugly out there right now” in terms of the U.S. economy, including gross domestic product (GDP) and unemployment, he said, noting: “We turned the spigot off of our economy and we’re seeing  some really significant changes in the economic metrics” as a result, he said, noting the GDP fell about 5% in Q1 and we should “keep in mind that’s capturing just a couple of weeks” because “mid-March is kind of when the pandemic really significantly impacted the economy and we’re looking for much uglier numbers in the second quarter.”

Most predictions are that there was about a 30% downturn in economic activity, “which is certainly unprecedented since we’ve been keeping economic data statistics in the U.S. economy,” he pointed out. Overall, unemployment has grown 14.7% and is likely to increase more in the months to come, he predicted.

“We’ve never seen sharp changes like this,” he said. Whereas in the 2008-2009 recession, “unemployment was a lagging indicator on economic activity, we’re in a situation now where it’s the leading indicator.”

Despite those “ugly” economic facts, he said “there are some signs of hope on the horizon.” For example, healthcare is the sector that saw the largest decline in GDP, largely because of the many medical procedures and surgeries that were delayed due to the pandemic, but that’s “likely economic activity that will be made up in the future” and not “lost forever,” he said.

Also, 80% of Americans filing unemployment claims have indicated they expect to be out of work only temporarily, he noted. However, “some of those jobs will be permanently lost; some companies will not be able to come back,” he predicted. But it is a “positive sign for a quicker recovery” that many employees expect to get their jobs back and that many employers have indicated they plan to hire back employees, he said.

California, meanwhile, has been “hit harder” than other states due its reliance on tourism and trade, he said, predicting leisure and retail will probably be slower to recover in California. L.A. unemployment stands at 20.3% and there are “structural headwinds” in housing and demographics, according to Smith. However, it is a resilient state that has been through large swings in the past, he noted.

The May 27 HITS Live event tackled the quickly shifting IT needs of studios, networks and media service providers, along with how M&E vendors are stepping up to meet those needs. The all-live, virtual, global conference allowed for real-time Q&A, one-on-one chats with other attendees, and more.