Veritone: How Broadcasters and Advertisers Can Get a Lift

Veritone on Sept. 29 provided a mostly upbeat take on the state of broadcasting and advertising, while offering tips for how broadcasters and advertisers can up their games.

After all, that advertising is “much more measurable now” and “the metrics of success can be quantified,” he said during the webinar “Uplift Your Broadcast TV and Radio Advertising.”

There are also “all kinds of partner insights that can be generated, and it’s a great time for you to be able to allocate your budget to broadcast now that it can be more easily measured,” he added. 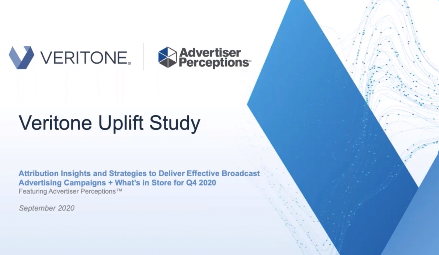 Meanwhile, broadcasters who are not yet utilizing an artificial intelligence (AI) attribution tool should make that a priority, according to Veritone. They should also test and optimize, continuing to “tinker and refine techniques to help advertisers achieve maximum lift,” according to the company. Broadcasters should also create time for more live reads and organic mentions now that they can demonstrate the effectiveness of those techniques.

Broadcasters should “stay optimistic,” Cramer said, noting “all signs are pointing to strength in broadcast advertising overall despite any negative perceptions that might exist.”

A positive sign of the study, which was based on a 15-month analysis of more than 250 local and national campaigns across 100 television and radio stations in the U.S. and Canada, was that the average campaign lift showed very little variation between the first quarter and second quarter of 2020, Cramer said.

“There was really very little variance with the onset of the pandemic,” he pointed out, adding: “We think that’s a positive thing. We think that’s a good cause for some optimism.” However, he was quick to add: “Whether this holds true, we’ll have to continue to monitor this trend and have to study it over a longer period of time.”

Based on the results, Veritone “found six core elements that strongly impacted the lift” of an ad campaign, he said, pointing to: The “richness” of an offer driving response; “an element of urgency or time sensitivity” like a three-day sale; use of intrigue and visual teasing, such as asking viewers to visit your website for more details; novelty, such as a coupon at a website for a buy one get one free deal or a 50% off promotion; clear calls to action; and the importance of using a URL/web address that is easy to remember like Hotels.com.

“As advertisers are looking for non-traditional ways to engage with consumers… dollars are “being shifted from canceled sports to other types of sponsorships,” Cramer also noted.

Providing bonus insights he said were not included in the report, he said: Lift per spot was most pronounced around week three of an ad campaign and remained strong up to 13 weeks; total lift was directly correlated to spot frequency; and “the more impressions that are generated over time, the greater the response.”

Also during the webinar, Lauren Fisher, VP of business intelligence at Advertiser Perceptions, pointed out that, at the start of the pandemic, there were cuts, pullbacks and cancellations with ad programs. 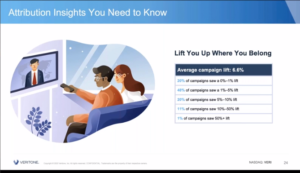 “The vast majority over this period had either canceled, paused or pulled back some type of spend,” she said, adding that “disrupted nearly every aspect of the advertising ecosystem — it disrupted every channel, it disrupted every media, [and] pretty much everyone was very disrupted.”

Early during the pandemic, “some important digital channels bore the brunt of the initial pause or cancellation or knee-jerk reaction to the coronavirus,” she said, noting advertisers also “hit the pause button” on TV spending. Part of the reason was the cancellation of a lot of sports events, she noted.

There was a “massive amount of uncertainty” around the pandemic and advertisers shrunk the “planning horizon” —  media planning periods were significantly reduced to no more than three months out from five months or more, she said. Media buyers also shifted budgets to formats and channels where media consumption and online shopping were increasing, she noted.

We should expect a shifting of ad dollars previously allocated to canceled sports or live programming, she went on to say.

Key takeaways to keep in mind as you navigate the fourth quarter, she said: Keep a close watch on the metrics that matter and be prepared to modify as needed; following eyeballs – and wallets – will remain top of mind; and the mandate for flexibility will remain for the indefinite future.