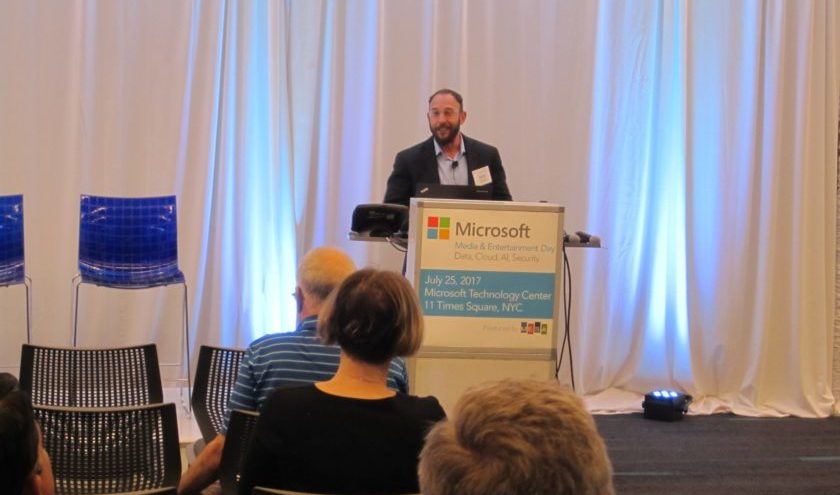 Martin Wahl, ‎principal program manager for Azure Media Services, was a big fan of the “Choose Your Own Adventure” books growing up.

And today, he’s seeing something similar in nature occurring with video content, thanks to technologies like artificial intelligence and the cloud.

“I’m hearing stories about people who are changing the content they make so it’s dynamically receptive to the audience, as the audience is watching,” he said, speaking July 25 at the AI, Machine Learning and Bots event in New York, and pointing to a live talk show host responding to viewer feedback in real-time as one example.

For the longest time, video analytics was mostly based simply around how many people tune in to programs. Today, thanks to AI and cognitive capabilities in the cloud, analytics is so much more, extracting relevant metadata in real time, unlocking value from the metadata in content as it’s consumed.

“The cloud can generate this data for you immediately, and then lets you decide what the value of that data is, and how to use it,” Wahl said.

Auto-translation, facial and object recognition, the capability to search for spoken words as searchable text … these AI- and cloud-enabled technologies aren’t futuristic anymore, they’re available today, and can be used to better monetize content, Wahl said.

The sheer amount of video traffic and how it dominates the internet is well-known, he added, and while everyone’s approaching the problem from different ways, but pretty much everyone has the same problem: moving a massive amount of video that needs to be put in front of as many eyeballs as possible, as quickly as possible. That’s where cloud-based video streaming comes into play, Wahl said.

“This is the area that we as an industry will have to [use] to compete,” he said. “We always talk about this mysterious gray area of interactive TV, ordering a pizza or the sweater that Jennifer Aniston is wearing, that example we’ve been hearing about for 15 years.

Automating metadata from cloud-based video, allows content owners to be more responsive to the audience, and make advertising more relevant, “instead of a shot in the dark,” he added.

More than 300 people in the media and entertainment sector attended the inaugural Microsoft Media & Entertainment Day, which included the AI, Machine Learning and Bots event, and was held at the Microsoft Technology Center (MTC). Produced by MESA, the event featured four half-day event programs, covering content protection, video in the cloud, artificial intelligence and machine learning, and metadata’s place in the content lifecycle.