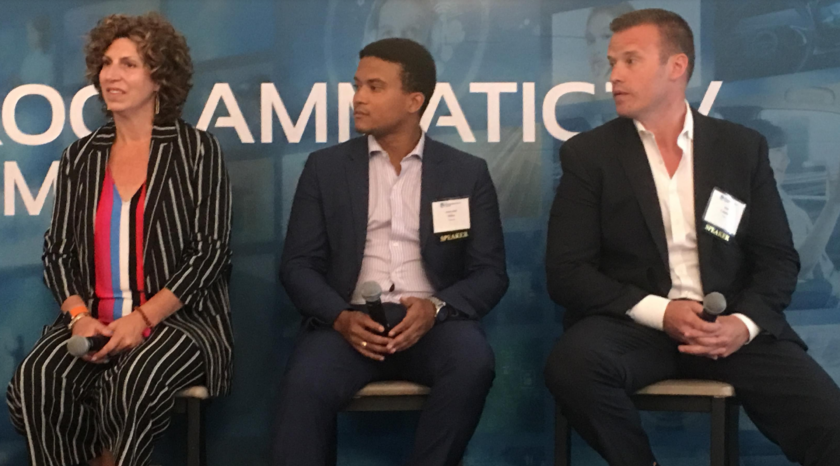 NEW YORK — The OpenAP audience-targeting media consortium will continue to be relevant even five years down the road for the still relatively nascent advanced advertising market, according to Denise Colella, SVP of advanced advertising products and strategy at NBCUniversal.

Because the TV industry is expected to “change more in the next five years than the last 50,” OpenAP will remain “necessary,” she predicted June 24 during a keynote conversation on “OpenAP 2.0” at The Programmatic TV Summit.

“I think we’ll start looking at IP delivery and impression-based buying on television,” she said. But she conceded: “I don’t know if OpenAP will look the same” in five years and “it may take on a very, very different meaning.”

However, she told the Summit: “The ability to get people to access close to 50 percent — and hopefully by then more — of [ad] inventory in the market is very powerful.”

Turner/WarnerMedia, one of OpenAP’s founding members in 2017 along with Fox Networks Group and Viacom, recently dropped out of the consortium following AT&T’s purchase of Time Warner. That quickly led to a revised, 2.0 version of OpenAP in which NBCUniversal teamed with Fox and Viacom.

Asked how soon it’ll be before we see other companies join OpenAP, Colella said: “I think very soon.” The consortium has some work ahead of it despite the strides it’s made so far, she said, explaining: “I think that we have to figure out how we model the consortium. It’s great. It works for all of us, but we’re very big players. We have to make it attractive for the smaller players.”

The “training wheels [will] come off” for players in the advanced advertising business going forward, Dan Callahan, VP of audience and automated sales at Fox, predicted. “I’m most excited, I think, about [the] emerging addressable digital marketplace really picking up strides and getting some momentum this year,” he said.

The panelists were asked if OpenAP had any other products in the pipeline that could be discussed. “Not that I think we’re discussing today,” said Amarachi Miller, VP of product management and data science at Viacom. But OpenAP’s “roadmap” includes “anything that is involved with the sharing of information in general and positioning of information,” he said, adding: “There’s a lot of things in the chamber. We’ll see where that goes.”

The consortium will also have to come up with a “cross-platform addressable” strategy to go along with its linear and digital platforms, Colella chimed in, adding: “These are all things that we’re considering every day. A lot of that depends on how fast we’re moving, what kind of team we have and what kind of demand there is.”

In announcing the creation of OpenAP in March 2017, the founding members described it as the TV industry’s “first open platform for cross-publisher audience targeting and independent measurement.” In an open letter that was released to the public at the time by the companies, they said: “The evolution of television has brought new advances in audience targeting across premium publishers, which is enabling advertisers and agencies to drive more efficiency and more effectiveness with their TV budgets. While demand for audience targeting has grown significantly, adoption has been limited by the fact that audience buying is not as transparent, as consistent and as easy as traditional guarantees. It doesn’t need to be that complicated. That changes today.”

Noting that the platform was operated by a “leading independent auditor,” the companies said at the time that OpenAP would “deliver cross-publisher targeting and independent measurement for advanced audiences.” That meant “consistently defined audience targets can be activated across any OpenAP member publisher,” and it also meant there would be “truly independent measurement and reporting by design, not just reactive third-party verification,” the companies said.

The companies also promised that OpenAP would be a “single platform that agencies and advertisers can integrate with their own planning systems to activate advanced audience targeting and independent measurement within premium content.”