Direct-To-Consumer Platforms are Getting a Boost From COVID-19

Direct-to-consumer streaming services were already seeing significant growth before COVID-19, but their popularity has only soared even more since the pandemic started as more viewers than ever have found themselves with extra time on their hands while being sheltered in place, according to executives from Sony Pictures Television, Starz and ViacomCBS.

Along with an executive from technology company Cognizant, they also discussed the important role that data is playing in helping to provide more personalized offerings to viewers, while speaking during an on-demand session called “A View from Above: TV Transformed” that was part of the online NAB Show Express Executive Leadership Summit.

Last year during a Variety panel at the Sundance Film Festival, “all the talk was about the value of data and analytics,” Tiran Dagan, chief digital officer at Cognizant, pointed out. And “that is one of the mega trends that we’re seeing,” he said.

“The data drives and informs decision-making for every aspect from the consumer experience – personalization and targeting of the content as well as targeting the right ad in the front of the right person at the right time and the right content,” he said.

Agreeing with him, Alison Hoffman, president of domestic networks at Starz, noted that her company is “extremely data-driven,” adding: “The real-time viewer consumption data that you get from a direct-to-consumer service in unparalleled. That’s what really enables you to service that viewer, understand… viewing patterns, what they’re interested in, [and] what you can serve them next that is really going to really create stickiness with the service.”

What the data also provides are “avenues to reach out to new customers,” she said, explaining: “If I understand content affinities within my product, I can also understand how to spin up campaigns that are going to put those content pieces together and bring in new customers.” 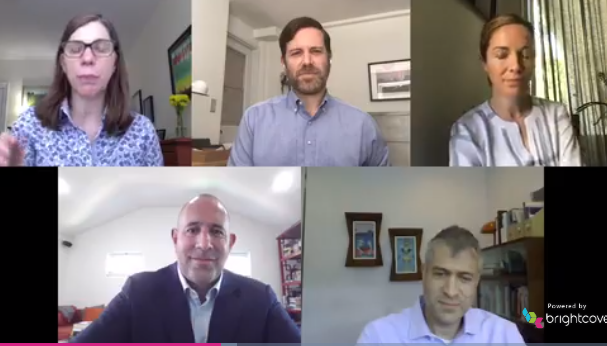 Starz is “seeing increased subscriber acquisition, increased viewership [and] increased engagement” amid the pandemic, she said. One key to that success has been having a huge catalog of older content that viewers can pick from, she said, noting: “The value of library at a time like this, I think can’ be understated. People are plowing through content at record pace right now because they have available time. And so I think the better your library, the more diverse your library and the deeper your library, the more satisfied your customers are and the stickier they are right now.”

Starz is seeing older titles such as its “Black Sails” being more heavily viewed than it has in a while, she noted, adding it’s younger audiences that are “driving” over-the-top (OTT) and direct-to-consumer streaming services.

There is a “hunger that audiences around the world have for great storytelling – probably exacerbated over the last couple of months – but definitely demonstrable over the past two, three, five years,” according to Keith Le Goy, president of distribution and networks at Sony Pictures Television.

Signup numbers for Sony’s Funimation anime streaming service are “through the roof,” he said. “It was going well before we were in lockdown and obviously that’s just accelerated since then,” he noted.

Sony is seeing “massive demand for our library” because “people are home and people are looking to be entertained and to be distracted and to laugh and to feel and to have anything that takes them away from the sort of scary reality that we’re all facing, and that is our job – all of us as storytellers and entertainers – to give that relief and that distraction,” he said.

“People are plowing through content at extraordinary rates, rediscovering classic shows that also maybe take them to a happier, more nostalgic time in their lives, when the world seemed like a simpler” and more fun place, he noted.

“For the first time in a long time, we have the opportunity to reengage audiences with our products and with our content,” he went on to say. Sony and other media companies are trying to figure out how to build on new viewing habits so that “when we come out of this — and we will — we can come out of it stronger and more connected to our audiences than ever before and to have a really firm foundation that we can continue to build off of, and I think that is a tremendous opportunity,” he told viewers.

Moderator Cynthia Littleton, business editor of Variety, pointed to Variety Intelligence Platform data showing global subscription video on demand (SVOD) revenue was $36 billion in 2018. And the company projected it will grow to $87 billion in six years, she noted.

Jeff Grossman, EVP of content strategy and operations for CBS All Access and CBS Entertainment Digital at ViacomCBS, agreed with Littleton that this is a great time to be adding many Paramount titles to its library.

“March and April have been record months in terms of total streams inside of the service,” Grossman said, adding his company is seeing strong live TV consumption also.

“CBS All Access already has one of the largest TV libraries among the SVOD services and so we’ve been looking at, for some time, how to expand that library with all the tremendous content from the Viacom cable brands” after the recent merger between CBS and Viacom, Grossman said. “We’re going to start to accelerate and operationalize bringing some of that content into the service,” he noted, adding: “That’ll accompany some sort of changes in our interface to make sure that content is easily accessible. And then, over the course of a slightly longer run, we’re looking at how we sort of connect all the amazing pieces of content that we have inside of the ViacomCBS family through our SVOD service.”

Although several industry executives and analysts have predicted the number of OTT services will decline, Cognizant’s Dagan told viewers: “A lot of this is market forces that will have to play out…. There’s going to be room for the audiences to be sliced and diced in different ways. We’re not anticipating any particular number for it to be reduced to because it’s more a matter of the supply/demand and the size of the audience.”

However, he said: “At some point, people will look and add up how much are they paying now compared to [their] $200 cable bill” and figure out if they are spending more or less by shifting to OTT services.