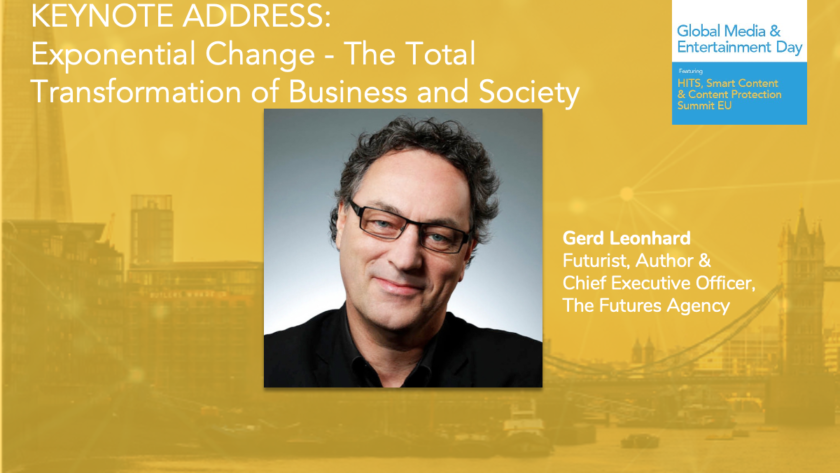 The pandemic has resulted in more change — and more uncertainty — for the media and entertainment industry than perhaps any other modern challenges its ever faced before, according to Gerd Leonhard, a futurist, author and CEO of entertainment consultancy The Futures Agency.

“It’s safe to say the last four months have been more than anyone bargained for,” he said 2 July, speaking during his keynote presentation — “Exponential Change: The Total Transformation of Business and Society” — at the Global Media & Entertainment Day event presented live, virtually, from London. “The whole narrative has changed.”

And yet for all the major changes — closed cinemas, shuttered productions, forced remote-working — the consumption of entertainment was already experiencing exponential growth, Leonhard said, and COVID-19 worldwide has only seen that growth accelerate, with at-home viewers spending more time with content than ever before.

“With exponential change, we’re at the take-off point,” he said. Media and entertainment firms are looking more and more to digitisation and automation, to more quickly move as much of their operations as possible from a physical to a digitally-native world. “In 10 years, we’re going to live in a world that is so technologically advanced, it’s almost impossible to imagine. In the next 20 years, we’ll have seen more change than the last 300.”

To be on the winning side of not only the long-term changes coming, but the to excel during today’s current crisis, one must be agile, Leonhard said, because “There’s no such thing as going back to ‘normal.’”

“This is not like the financial crisis, this is not like Fukushima, not like Sept. 11, we won’t go back to the same world as before,” he said. The impacts of all those disasters were felt, and some changes were made here and there, but the pandemic will see such long-term changes as a result worldwide, the media and entertainment players need to be on top of what’s around the corner now: everything will be thought of in terms of remote possibilities at the outset, the cloud and constant digital connection will be absolutely crucial, supercomputing will be paramount.

And Leonhard offered an example of change already in front of everyone: how we communicate amongst each other. He’s used to doing 100-plus live events a year. He’s likely to do a similar amount this year, but with no traveling … and he feels as if he’s spoken to more people on a more personal level in the last four months, than he had the previous 12, he said.

“Both in the neighborhood and all the Zooms. We connect more now,” he said.

For media and entertainment, reminding yourself that data is your No. 1 tool ‚ and acting on that fact — will be one of the biggest factors separating the winners and losers long-term, he added. “If you haven’t thought about pivoting yet, now’s the time.”

The fourth annual M&E Day event, presented by MESA, featured mainstage panels and more than 15 breakout sessions, covering the latest it data, cloud, IT and security across the media and entertainment technology ecosystem.