The annual PBS Short Film Festival has returned with a twist. Now playing until August 31, 2021, audiences can watch a curated series of stories from independent filmmakers via immersive experience Screen on the Green. To make the experience possible, the PBS Innovation Team leveraged a host of technology from Amazon Web Services, including AWS Media Services, Amazon Simple Storage Service (Amazon S3), and Amazon CloudFront.

Part of a multiplatform initiative to increase the reach and visibility of independent filmmakers from across the country, the PBS Film Short Film Festival amplifies the voices of diverse content creators. “Screen on the Green” gives these filmmakers a new platform to reach a wider audience in a more engaging format. Up to 300 participants can enter the experience at a time and choose from one of two environments—a daytime setting with city scape views or a moonlit outdoor landscape. At the center of each space sits a large-scale outdoor cinema screen, on which all 25 films play consecutively. As participants join, they can see the space populate with avatars and explore hidden Easter eggs, such as film posters or ways to support PBS.

PBS has experimented in the virtual reality (VR) space, but “Screen on the Green” marks the first time that the organization is making the PBS Short Film Festival accessible in VR, a decision that coincided with a shift in audience viewing habits during the global pandemic.

In previous years, the festival held in-person screenings in the Washington D.C. area, but last year, large gatherings and events across the country ceased. Even as pandemic-driven restrictions have started to ease, many people remain reluctant to return to large gatherings and theaters. Looking to continue its tradition of showcasing the work of the talented filmmakers via a shared experience, the PBS team recreated the theater experience in VR with help from AWS. 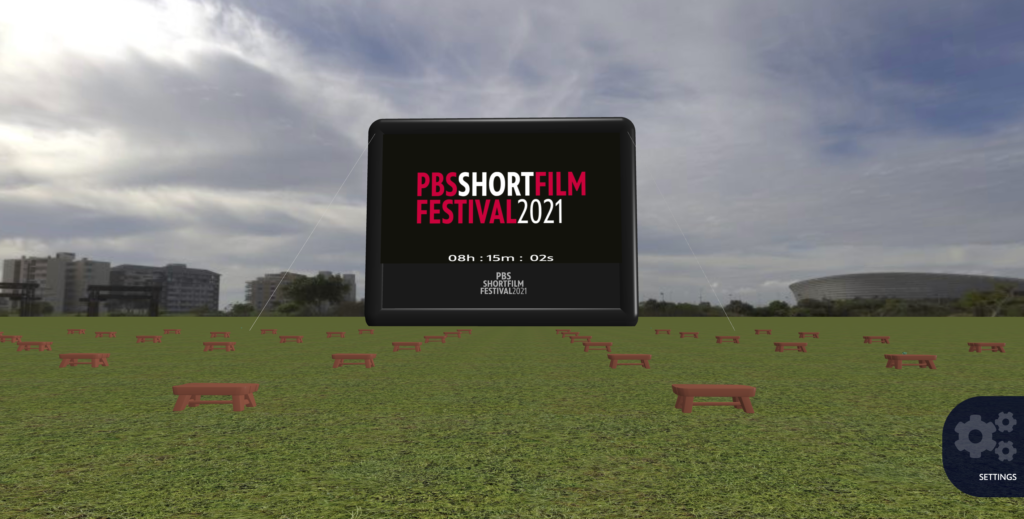 “Filmmaking is an art form that’s hard to recreate in a linear format. Rather than broadcast the films, or stream them via a social platform, we wanted to transport audiences to the cinema,” said Mikey Centrella, Director of Product Management, Digital Innovation Team at PBS. “The pandemic provided a unique opportunity for us to test a VR format for the festival, especially as remote work has helped audiences become more comfortable with being immersed in a video experience, and VR technology has improved. ‘Screen on the Green’ celebrates stories that are often underrepresented in filmmaking in a unique format that allows participants to experience these remarkable, emotional moments that the filmmakers intended together.”

Bringing the experience to life required a simple and efficient way to set up a live linear streaming channel featuring all of the short films that could be scheduled to play in the experience ahead of time. Channel Assembly with AWS Elemental MediaTailor provided Centrella and team with an intuitive, automated, and reliable way to stream multiple videos together, and spin up a channel quickly. For video distribution, the team turned to Amazon S3 and Amazon CloudFront, which provided the scalability required to deliver the experience to as many viewers as needed.

Ensuring a high-quality, low-latency live video stream for hundreds of users in a synchronized fashion proved crucial to creating the sense of community that Centrella and his team envisioned for the experience. “Today’s consumers expect a stable stream that doesn’t buffer, and we knew that AWS could provide that,” he said. “Offering a sense of spatial immersion and community was also key to helping viewers feel as if they are watching films with others, which meant we’d need all user positions and orientations in the virtual space to be broadcast out and rendered in real time. For these updates to appear smooth, we needed an infrastructure capable of receiving and broadcasting positional data from hundreds of users every 33 milliseconds, and Amazon Elastic Container Service (Amazon ECS) and Amazon ElastiCache for Redis delivered.”

All “Screen on the Green” video content is housed in a proprietary media manager solution, which distributes each MP4 short file to Amazon S3 and Amazon CloudFront. To create the film festival stream, AWS Elemental MediaConvert, a file-based video transcoding service, is used to transform the MP4 files into HLS playlists. Channel Assembly with AWS Elemental MediaTailor uses the HLS playlists to create a linear stream ready for distribution on the experience as a single output. The stream is then ported into the video player supporting the WebXR experience, which lives on a web page hosted from an Amazon S3 bucket.

Looking ahead, the PBS team remains focused on rapidly building and testing ideas. Using AWS services like Amazon S3 and Amazon CloudFront will allow them to spend more time iterating and exploring emerging technology versus infrastructure management. Centrella concluded, “AWS services allow us to create content for prototype projects that would otherwise likely prove too labor-intensive and costly. We can continually explore new technology and ideas in ways that we normally couldn’t without an army of developers. Even though PBS may not have a VR channel yet, we’re not writing off the idea for the future, and a lot of the work we’re doing with AWS will provide the groundwork for future innovation in this arena.”

AWS offers the most purpose-built services for direct-to-consumer (D2C) and streaming to help companies reliably deliver, monetize, and support live and on-demand media over the internet, and bring unparalleled experiences to screens everywhere. Explore https://aws.amazon.com/media/direct-to-consumer-d2c-streaming/ to learn more. To experience “Screen on the Green,” visit: https://vr.pbs.org.