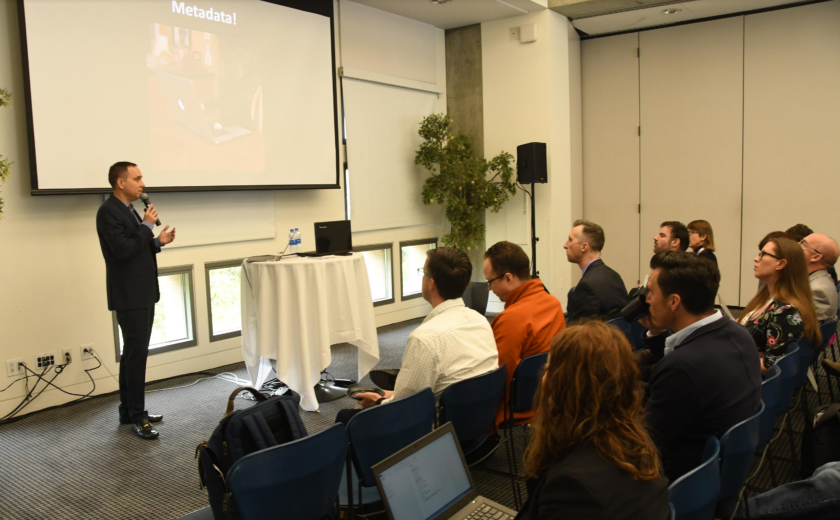 Effectively using metadata is crucial for media and entertainment (M&E) companies today and using artificial intelligence (AI) and other tools that enable us to harvest it at scale to gain knowledge about our data fast is becoming just as important, according to David Flynn, CEO and co-founder of Hammerspace, a software-as-a-service company that specializes in delivering unstructured data across the hybrid cloud.

“We want to go from just metadata to using tools that allow us to harvest it in bulk so that we can gain knowledge about our data very, very quickly,” he said Feb. 27 during the session “Metadata: Title Here” at the standing-room-only Smart Hollywood Summit. And we “want to keep that metadata very closely attached to the data itself,” he told attendees.

Extensible metadata changes every aspect of the media workflow, by reshaping the structure and organization of how people manage data. Rich metadata allows artists to apply the creative process to solving problems rather than adhering to storage IT concepts. AI-generated metadata harvested from data makes content contextual and tactile while automating the management of data across the infrastructure. But to achieve that level of data agility, we must separate the management of metadata from data. Storage systems will never do this, and MAMs don’t operationalize hybrid multi-cloud environments; both need access to expansive metadata control so that humans can process it without having to follow limitations dictated by machines.

In his Smart Hollywood Summit session, Flynn discussed concepts and principles that illustrated how companies can make their metadata give their data a human face.

Flynn noted that the prior company he co-founded, Fusion-io, “introduced flash in the data center.” That’s related to his new company in that “it’s all about getting more value from your data more quickly,” he said, adding: “I’m not a hardware guy, but I noticed the potential that there was in flash to allow people to work much faster with data, and this is the flipside of that coin. This is about being more agile with data – being able to find what you need and use it more readily. And that’s all about the metadata.”

Today, working with data is challenging, he noted, pointing to a slide showing the famous scene in an old “I Love Lucy” TV show episode when Lucy and Ethel were desperately trying to keep up with the chocolate on a conveyor belt.

Today’s data workflows involve “finding what you need, getting it into the applications, getting it to the users that need it [and] having them be able to sort through what is it that’s actually relevant to work with,” he said, calling it an “extremely manual process [that’s] time-consuming and very wasteful.”

Using the enterprise sector’s typical tools, to try and get out of that mess, an organization would just “stick the data in a big silo,” but that “restricts the access,” or you would “copy the data around to multiple storage systems and then people don’t know where to find it,” he said. So, “moving data around is like…cutting off Hydra’s head – you’re just making more data to manage if your main tool for managing it is proliferated around through copying,” he said.

We can fix that, he explained, by “getting that metadata to be rich enough and powerful enough for two main purposes.” The first is “presenting the data to those who use it in an intelligent way that allows them to find what they need more quickly and be able to create value from it more quickly,” and the second is “about managing how the data is actually physically realized” across the cloud and data centers, he said.

Using flash provides the “ability to get ultra-high performance by having the data distributed closer to where it’s being used,” he said. “But that makes the nightmare of managing data even more challenging,” he noted.

That’s why it’s so important “to keep that metadata very closely attached to the data itself,” he said, adding: “If your metadata is detached, then you can’t put it in a loop to where you can filter what data you want to talk about so that you can feed it AI to have it become more competent at recognizing things and use that ultimately to drive more value and data.”

In addition, metadata “comes from being able to embed the rules about how the data should be presented and what data should be presented,” he went on to say. That’s “particularly important for AI applications because AI doesn’t change the old adage garbage in, garbage out; it actually makes it much, much worse,” he said, adding: “If you don’t have a very well-filtered set of material, then what you’re going to get [are] very bad results.”