NEW YORK – 8K Ultra High-Def (UHD) isn’t just a story about improved resolution and all signs seem to be promising that 8K TVs will be embraced by consumers and content creators as well – perhaps even more than was the case with 4K, TV makers and a consumer electronics retailer said June 13 during the CE Week panel session “8K is Coming: What it Means and Hoe to Sell It,” at the Javits Convention Center.

“There was a great deal of skepticism among the content community on the value of 4K,” Tim Alessi, senior director of home entertainment product marketing at LG Electronics USA, conceded. “Nobody was in a big rush to go out and remaster all of their movies or start shooting in 4K” because there was doubt whether improved resolution was enough of a reason for a consumer to go out and buy his or her “fifth copy” of “The Godfather” – or whatever their favorite movie was – in the latest format, he said.

But when High Dynamic Range (HDR) arrived, that served as a “trigger,” according to Alessi. “Everybody saw the value in that because it was a much better experience” and “not just more pixels – it was smarter pixels, as some people like to say,” he noted. Now, “the groundwork is already laid for 8K, so I think the migration to 8K content will be a lot smoother than it was from high-def to 4K,” he predicted.

What stands to also help is the video game sector seems to be heavily embracing 8K now, according to Andrew Sivori, VP of TV product marketing at Samsung Electronics America. He pointed to support for 8K from game developers and Microsoft’s E3 announcement that its next console will support 8K. 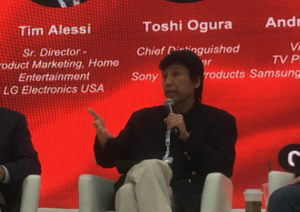 Sony is also supporting 8K in its next game console, James Sanduski, president of Sharp Home Electronics Company of America, noted. And he predicted “the content will definitely come” in 8K from Hollywood also. For one thing, “Lawrence of Arabia” and several other 65-mm movies have already been “rescanned” into native 8K, he said.

8K TVs are also a relatively easy sales pitch to make to consumers because, even without explaining that 8K TVs offer four times the resolution of 4K, “everybody can understand that eight is bigger than four,” Toshi Ogura, chief distinguished engineer at Sony Home Entertainment & Sound Products, said.

Whether or not consumers see the difference right away between 8K and 4K TVs will depend on where they’re sitting, Alessi said. “One of the real benefits of 8K is the ability to have a larger screen size in a smaller space without seeing the pixelization or the so-called screen-door effect,” he said.

8K TVs also fit right in with the continued trend towards larger and larger screen sizes, Alessi said, noting “the biggest growth in the TV industry is in the large and ultra-large screen-size category,” from 70 inches to more than 80 inches. “That’s going to play into the strengths of 8K because you can sit closer to it,” he said.

Agreeing that consumers will see the difference in resolution between 8K TVs and 4K models, Sanduski said that, after all, 8K TVs offer “four times the resolution of 4K.” 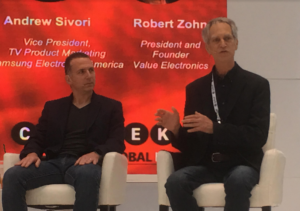 But he added: “From Sharp’s point of view, it’s more than just a resolution story” because 8K TVs also feature HDR, wider color gamut and enhanced backlighting with more dimming zones, which all enable greater picture realism than you get with 4K models. Also significant with 8K TVs are their higher frame rates and the one aspect that often gets overlooked: Their enhanced audio, with 22.2-channel surround sound part of the 8K specification, he said.

An added benefit of 8K TVs is that they have artificial intelligence and machine learning built in to make sure that images are displayed accurately, Sivori pointed out, adding: “There’s a level of processing” and upscaling in them that “we’ve never ever had before” in TVs.

Plus, even before a significant amount of native 8K content arrives, 8K TVs will make the content everybody already has look better, he noted. 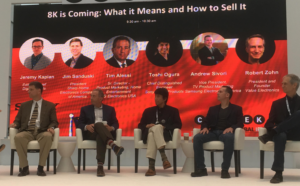 Agreeing that 8K TVs are “not just about the resolution,” Robert Zohn, president and founder of retailer Value Electronics in Scarsdale, New York, said the processing and panel technologies are all enhanced on 8K TVs.

But he cautioned that 8K “has to be displayed properly” at retail. 8K cameras, meanwhile, will be another way in which consumers will be able to get native 8K content on their TVs.

Another issue that must be considered is Internet bandwidth, Sony’s Ogura said, explaining: “If the bandwidth is not enough,” the result is “noise,” so that’s something “we need to be very much careful about” with 8K TVs.