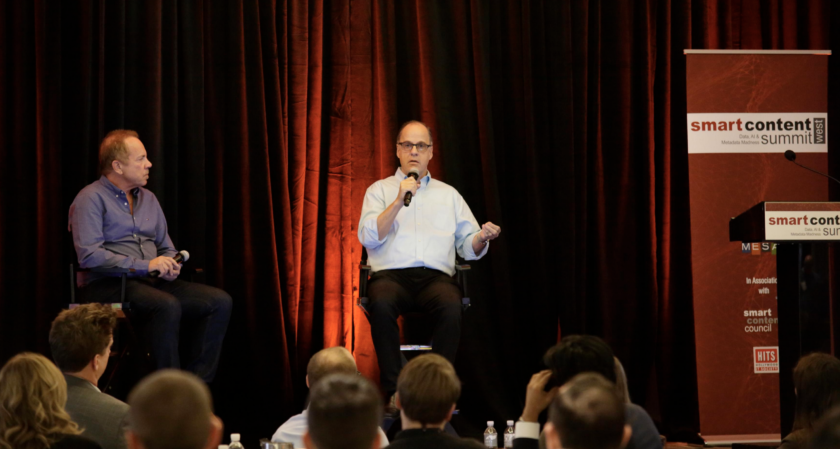 LOS ANGELES — MoviePass, the $10-a-month movie theater subscription service, is closing in on 2 million subscribers, and while it’s losing money on every movie ticket used via its service, Ted Farnsworth, chairman and CEO of MoviePass parent company Helios & Matheson Analytics sees profitability around the corner. That’s because of the subscriber data MoviePass is collecting.

“The gold was really in the data,” he said. “This is the first time the studios can look at the data, and find out who the viewer is,” Farnsworth said, speaking Feb. 27 during a keynote at the Smart Content Summit West event. And while MoviePass isn’t selling its subscribers data, it is providing some of the basics of its users’ make-up: household information, gender, age, movie habits, and other general data.

“We gather all that data, and then use it to promote very specific things,” according to MoviePass CEO Mitch Lowe, noting that MoviePass has seen upwards of triple the attendance to some films that would have otherwise underperformed. “If you take out the blockbuster hits, people don’t really know what they’re going to see until that day.”

“Our thesis at MoviePass is, despite what you hear about the declining desire to go to the movie theater, there are millions who want to go to theaters,” Lowe said. “They just don’t like the business transaction, the à la carte.

“If you remove the friction … you get more happiness, more joy, and more transaction.”

The goal, according to Lowe, is for MoviePass to be the “Orbitz or Travelocity” for the movie theater business. But that’s also where the push-back from theaters has come from, he added: “Nobody likes someone else between you and your customer,” he said. “They feel like, ‘Gosh, we should have done this ourselves.’ That and they don’t feel we’re incremental.”

Currently, MoviePass is purchasing approximately 6% of all movie tickets in the country, and expects to hit 10-15% this year, Farnsworth said, and MoviePass has found that not only are subscribers seeing movies they otherwise would have missed (Lowe jokingly called the service “Bad movie insurance”) MoviePass users spend more money on high-margin concessions, and MoviePass helps push traffic to other movie theaters in its users’ vicinity, Farnsworth said.

“Nobody has closed the loop on the movie-going experience,” he added. “We’re here for the long-run.”

To close the keynote, Lowe mentioned that MoviePass could potentially expand into Europe, where the theatrical market is fragmented, using local partners.

On March 8, MESA will hold its Smart Content Summit East event in New York City. To register or for more information, click here.