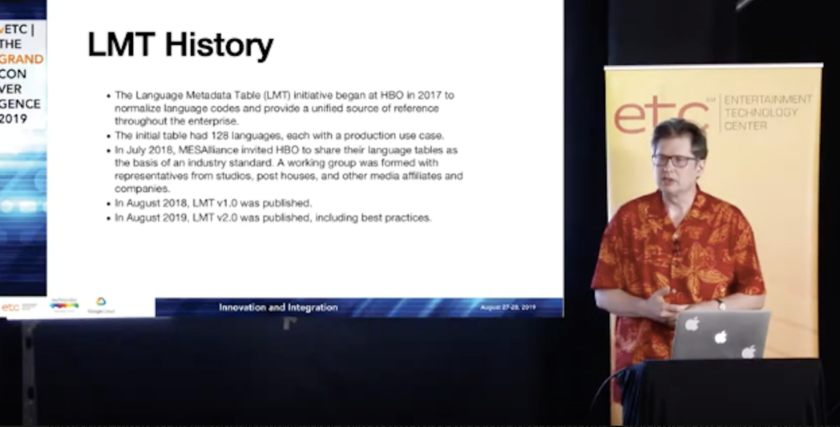 EIDR’s Kroon Praises LMT as ‘The Standard of Standards’

Richard Kroon, technical lead of the Entertainment Identifier Registry (EIDR), makes no bones about it: he’s a big fan of the Language Metadata Table (LMT), an open-source table of language metadata codes geared toward both the broadcast and entertainment industries. And you should be a fan too.

“It’s throughout the pipeline, throughout the workflow,” Kroon said Aug. 27 during a presentation at the vETC (Entertainment Technology Center at the University of Southern California) Grand Convergence 2019 event in Los Angeles. “It’s an uber-standard, the standard of standards.”

His presentation — “The Tower of Babel: Decoded!” — looked at the LMT standard’s version 2.0, released July 25, and all the benefits it brings to media and entertainment companies, with its mission being to create a standardized table of pre-combined language codes, used for implementation by entertainment and other industries, using IETF BCP 47 (Internet Engineering Task Force Best Common Practice 47.

He also shared how the LMT came about, praising the work of HBO’s Yonah Levenson, manager of metadata and taxonomy, and Laura Dawson, metadata analyst, who created the standard to tackle an internal issue.

“They discovered their different systems were describing languages in different ways … they needed to standardize in their own shop,” Kroon said. With the Media & Entertainment Services Alliance (MESA) coming on board to support the LMT Working Group as one of its communities of practice, LMT was “brought to a larger, industry audience, to become standardized … it’s definitely become a very popular topic.”

“Beyond the internal need of having systems talk to each other, there are a variety of reasons why it’s important to have standardized coding in general, and language in particular, between multiple systems in a single organization as HBO found, within supply chains, is that any time different systems try to communicate with different code base, there’s a need for translation,” Kroon said.

The advantages to adopting LMT are proving vast: it allows standard distinctions between spoken and written languages, provides flexibility for capturing language metadata for various departments, and allows for better communication and the same labeling between service providers, clients and content owners, Kroon said.

The use cases are proving to be “all over the place,” he added: for audio, LMT allows for a standard description of languages corresponding to a provider or client; in closed captioning, LMT distinguishes between audio language of content and the caption, when sending everything to vendors; for accessibility, American Sign Language can be distinguished for content; and benefits for both rights and acquisition (for territorial distribution) and electronic sell-through partners (languages displayed on the screen are done in the correct dialect) have been found as well.

LMT code values are developed and extended through vetted field definitions, and approved language code values, with a community of industry leaders who focus on information and data from broadcasters, distributors, professional associations and other stakeholders.