Terms like “all you can eat” and “binging” were once relegated to the analog domains of inexpensive food buffets and college keg parties. Today, however, these descriptors are much more likely to be applied to American consumers’ increasing appetite for and consumption of digital video content. Today’s viewers, across all age demographics, want more and are getting more as a result of more affordable traditional pay-TV services, OTT (over-the-top) streaming services, faster home Internet connections, and unrestricted wireless data plans. The era of doing more (watching) with less (spending) has arrived and it shows no signs of slowing in the near future.

According to a survey conducted by PwC in Q3 2015, 79 percent of U.S. consumers subscribe to some form of traditional pay-TV service and 79 percent of those customers re-ported that they could see themselves subscribing to cable in the following year. However, of those customers who subscribe to a traditional pay-TV service, nearly one in four—23 per-cent— had recently scaled back the cost of their pay-TV package.

The good news for pay-TV providers is that cutting back does not always result in the complete cancellation of service, or cord-cutting. Customers may trim their cords by “slicing and dicing the 500-channel package into customizable and smaller pieces.”

Cord-trimming is an emerging practice increasingly offered by traditional pay-TV providers as a “skinnying” solution for price sensitive and value conscious consumers. Like the near obsolete $18.99 compact disc, which often contained twelve songs, but only two or three which truly mattered to the consumer, the average pay-TV bundle offers 194 channels, but the customer only watches seventeen regularly. For pay-TV providers, the skinny bundle is the new à la carte single. Verizon CFO Fran Shammo recently reported that the company’s “Custom TV” skinny bundle was proving successful, with one-third of new FiOS video subscribers signing up for the service. “It will put pressure on the top line, but will improve our profitability from a programming standpoint,” Shammo told investors.

This financial improvement extends beyond Verizon. According to the equity research firm MoffetNathanson, cable was estimated to end 2015 with a loss of about 514, 000 subscribers, notably less than half of the subscribers lost in 2014, and less than a third of the subscribers who churned in 2013. This trend suggests that to remain competitive, traditional pay-TV providers must continue to explore more segmented, affordable video bundles capable of proving value, slowing churn, and, ideally, spur-ring growth.

Consumers choosing to shave all or some of their pay-TV expenses are not always responding to price sensitivity. They may be reallocating their entertainment spend for what they perceive as a higher value alternative, in this case, OTT streaming services. OTT provides on-demand streaming services which deliver film and television content via the Internet, without the need for traditional cable or satellite TV subscriptions.

The average US cable bill cost viewers $99.10 per month in 2014, according to the Leichtman Research Group, whereas the average monthly Netflix, Hulu Plus and Amazon Prime subscription fees are $8.99, $7.99 and $8.25, respectively. In our survey, 78 per-cent of respondents subscribed to at least one streaming service, and, of those who subscribed to pay-TV, 70 percent also subscribed to at least one streaming service. OTT’s consumer value proposition appears to be both compelling and sustainable, as the number of OTT services and subscribers is expected to grow in 2016.

Another primary way in which OTT services resonate with consumers is in their lack of a tether. Not only can OTT services be played from smart TVs, smartphones, and Internet-connected tablets, recent partnerships have taken them where traditional pay-TV providers have significant barriers to entry: into hotel rooms with Internet-connected televisions and onto Wi-Fi enabled in-flight airplanes. One hospitality company launched a limited partnership with Netflix to allow guests to stream their favorite television shows and movies on Internet-connected TVs in their rooms. The company is expected to provide this “portability” perk across its properties. 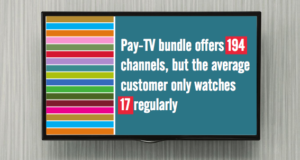 In September, Netflix and Virgin America teamed up to offer free Wi-Fi and unlimited video streaming to Netflix subscribers who were flying on Virgin America’s new ViaSat Wi-Fi-equipped planes. The sentiment driving Netflix’s on-demand distribution strategy is made clear in this comment by Bill Holmes, Netflix’s global head of business development, “Our members tell us they want to watch Netflix anytime, in any place where they have an Internet connection.”

Then, in November, Amazon and JetBlue activated a partnership that allows Amazon Prime members to stream video free of charge on over 150 JetBlue aircraft with Fly-Fi broadband Internet. In addition to being lower in total cost, OTT streaming services allow for viewing in advertising-free and advertising-light environments, providing a viewing experience with fewer commercial distractions.

Recognizing the value of content consumption as a decision driver, wireless carrier T-Mobile made video viewing easier than ever in 2015, launching Binge ON, which allows customers with a 3GB data plan or larger the ability to stream unlimited video on services such as Netflix, Hulu, Sling, ESPN, Showtime, and Starz, for free, without the usage counting against their high-speed data plans.

Even as T-Mobile’s adherence to the “no-throttling” component of net neutrality is being debated, video viewership among its customers is on the rise. According to one study conducted by the P3 Group, the average time T-Mobile customers spend with a single video app session increased from 15 percent to 50 percent depending on the particular app.

According to that same study, Binge ON subscribers also recorded 5 percent to 10 percent more app sessions per day, per user. Pay-TV’s response to OTT’s portability is TV Everywhere (TVE), which allows broadcast customers to access content from their network through Internet-based services—enabling them to view programming on multiple devices, both inside and outside the home, typically at no extra charge. While TVE can be credited with abating some churn, overall, adoption of TVE has been disappointing, owing to low overall awareness, a lackluster user experience, and authentication difficulties. Today, less than one in seven U.S. pay-TV households actively uses TVE.

Changing the channel on consumer experience

Rapidly evolving broadband infrastructures are enabling providers to deliver a smorgasbord of on-demand digital video content across multiple platforms and for lower fees. Competing on price and content type is becoming increasingly difficult with each network improvement and distribution deal. The next frontier for provider differentiation is the consumer’s experience of video content discovery and interaction, as evidenced by the current set-top box debate. 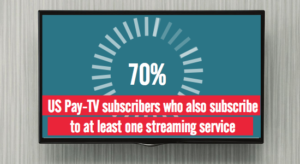 The Federal Communications Commission (FCC) is promoting a plan to provide pay-TV customers with more choice as to the supplier of their retail navigation devices, which could include companies like TiVo, Inc. and Alphabet Inc.’s Google Unit.

Cable and media companies are challenging the plan, asserting that it may threaten consumer data privacy and disrupt channel positioning.

Also in progress are efforts by Apple TV, Google Chromecast, and Amazon Firestick to make OTT viewing more engaging and manageable; but, with 400 original scripted series having aired during prime time in 2015, up from 371 in 2014, and presumed to increase in 2016, that task is easier said than done. The introduction of a user-centered interface can make content management easy and elegant.

The development of smart recommendation engines, interactive programming guides, contextual advertising, and other services which place the consumer at the center of the experience have the potential to make watching video delightful and entertaining, and customers loyal and profitable. Innovative advancements in the consumer viewing experience will be the space to watch this year.